Now the time had come, I finished the first Ironman World Championship over the long distance. And that was a ride with many uncertainties.
This is how the registration was for spontaneous people: just 15 weeks before in cold Munich I made the decision with my friends and booked it. Note: Without you, I might have reconsidered it, but I probably would have gone anyway.

The trip to St. George in Utah with the bike case is something special, but get an upgrade for the Jeep, so that you can then chug through the area comfortably with a panorama roof. The race pre-week was really nice, everything was much smaller than expected, and it was also spread out in the city with the various spots. The athlete check-in and expo were in the middle of the city, where the athletes’ parade was also held in a small group.
The Dixie Convention Center was then ideally suited for the spectacularly staged welcome buffet and race briefing. Opening with the typical Aloha, Hawaiian dances, and the blessing of the tribal elder from Hawaii, who flew in especially. Also, a good opportunity to get to know the bosses like Andrew Messick, Bob (Breakfast with Bob), and the Voice of Ironman, Mike.

I went into a sporty mood while cycling when I did the first tours through the snow canyon and also “just” went to Arizona. In terms of landscape, a desert area with many surprises, not only the vegetation with cacti, hummingbirds, and great stones but also the harsh weather conditions, which can change quickly here. Sandstorm, blazing sun, changing wind (always headwind, of course).

You can complain about the hills, the weather, water temperature .. or NOT!

So don’t complain then, but I haven’t really been swimming before, 14 degrees cold water is nothing to me. To take a Nitro Cold Brew at Starbucks after running to cool down – instead is really nice.

As already mentioned, my expectations were low and that’s how I organized the race. My swimming time of 65 minutes in 15-degree Celsius cold water was good, the first part of the swim was a challenge to somehow get my breathing rhythmic and flow because I was somehow dealing with the excitement, cold, bright sunlight from the front and do orientation.

The bike part was exceptionally good, I mean for the first 100km my split was over 35km/h. The hilly part was so beautiful, with great roads, and very fair competitors and I didn’t stress myself. But after 120 km it really only started, then came the mountains, the wind, the high temperature. It was epic to climb the last ascent of the snow canyon, not quite fresh from the dew, that was where the heat was and when I got to the top, I was looking forward to the descent towards Buff Street into town. I’m satisfied with an almost 31 average according to my preparation.

After the first mile, the start of the run was stop-and-go. My condition was bad, I was exhausted and my circulation didn’t cooperate at this temperature. At every aid station, I tried to cool down with ice and refill my energy. Ultimately, however, it was a death by installments, the most difficult situation was after the first run lap, as in mood as The Walking Dead to start then the next loop. But, I wasn’t alone.

I would have quit at any regular race, but the inner motivation, the encouragement from the spectators, who positively assumed how well I did it, gave me the strength to finish.
My greatest respect to everyone who contested the race here and didn’t quit. I fought my way through at the end and was still in midfield. Voila… Ironman finish, the 18th, cut! 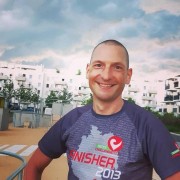